Favour Osiri-Wisdom is an encourager, a certified marriage mentor.

She holds a first degree in Marketing with two Post graduates in Journalism and Education.

Favour is a certified negotiation and conflict analysis expert with (USIP). United States Institute for Peace.

She is the coordinator of the foremost marriage academy in the south south region of Nigeria. The Wisdom Driven Marriage Academy in the city of Port Harcourt which equips both married and intending marriage couples to acquire skills to build the marriage of their dream.

Favour is a co presenter of a weekly Family show called on radio”Family Matters on Nigeria Info PH every Monday for the past 5 years.

Favour is the author of a series titled “Stay Prayed Up” a 31 day prayer card and audio devotional for children, husbands and wives.

She is the author of the best selling title How Not to Marry an I.D.I.O.T and Before You Marry

Favour is passionate about about leadership and raising women and girls. Having suffered so much under intense poverty growing up as the first child amongst seven children.
She founded the ModelWoman Foundation in 2016 where she mentors over 2,500 ladies in the facebokk community and whatsapp weekly.

The ModelWoman Foundation since inception has mentored over 100 ladies starting new businesses,10 first time books authors, and many others who started their own initiatives in the education sector etc.

In January 2020, Favour launched a mentorship program called Life Advance Program for ladies between the ages of 20-35years.

Favour believes her background cannot keep her back on the ground.

Favour has other family focused initiatives like The Mom and Daughter ball, and Couples Spark!

Favour is a co-pastor. She is married to Osiri Wisdom the Lead Pastor of The Wisdom Place a vibrant church in the city of Portharcourt.
She is the mother of 3 wise biological children Covenant , Grace and Wisdom and many adopted children.

Favour’s mantra is to live a value-driven life so she adds value to everyone who comes into her space.

My life's calling is to spread the love of God, encourage women and mentor marriages to live a value-driven life. 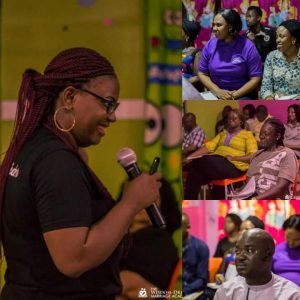